Leigh Hanson has been with United Way for three years and is also a 26-year veteran educator. She holds a Bachelor of Science degree in Art Education. She has taught in public and private schools as well as home educating her own children for many years.

Mrs. Hanson enjoys community outreach and working with both adults and children through United Way’s STEM (Science, Technology, Engineering & Math) Mentoring program, the STEM United Youth Project, as well as through church and ECKAN volunteerism. She is the mother of six children: three in college and three enrolled in USD 290.  She, her husband Jerad, and children reside at a small farm here in Franklin County.

You may contact Mrs. Hanson by emailing her at united.way.of.franklin.co@gmail.com or stemunitedyouth@gmail.com or calling her cell phone (913) 226-8607.

Tonia Johnson- Event Coordinator and Assistant to the CEO 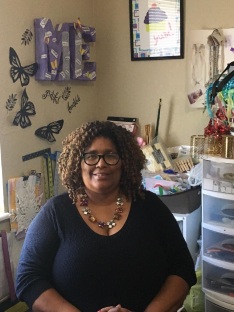 Event Coordinator Tonia Johnson has volunteered for the United Way of Franklin County in many capacities over the last seven years. Ms. Johnson is an artist and has taught art for most of her life. She has worked for Big Brother Big Sister of Miami County as a Case Manager and planning fundraising events and activities for youth in that role. Before Big Brother Big Sister, she also was employed as After School Program Director
for The Don Woodward, where she planned many successful events for children and families.

Ms. Johnson is a single mother of one child whom she educated at home. She also loves volunteering at her church, teaching youth church and being an AWANA leader.

Carrie Black has worked with United Way of Franklin County Association as a volunteer in the role of the Office Manager/Administrative Assistant to the CEO since August of 2019.

Carrie enjoys doing basic clerical work in the office. Her responsibilities have included stuffing envelopes for the annual mailer, organizing files and entering data into spreadsheets. Along with these tasks, Ms. Black has also helped as a volunteer for two of United Way’s Member Agencies, the Ottawa Community Arts Council and ECKAN.

Ms. Black’s passion is being a mom. Most of her activities revolve around this. During softball season she even volunteered her time to run the dugout for her daughters’ team. Additionally, in her free time, she loves to bake for family and friends. Unite Way is lucky to have such a dedicated volunteer running the office!